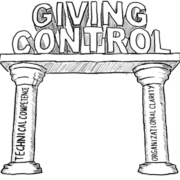 You have never heard about Intent Based Leadership? Then this post is for you. Jenni Jepsen consults, writes and speaks worldwide about leadership, teams, and how to make transformations work. She will be keynote speaker at Agile Tour Vienna and give an one-day course “Essential Intent Based Leadership” this September in Vienna.

We reached out to Jenni and asked her six questions about Intent Based Leadership. If you are a manager, director, leader who wants to create environments where people succeed, then read on!

If someone heard never before about Intent Based Leadership, how would you describe it in 150 words?

Intent-Based Leadership™ is fundamentally the language leaders and teams use to communicate at work – the words we use with each other and how we ask questions – in order to give control to people, so people who are closest to the information are the ones making the decisions.With this leadership paradigm, team members come to the leader describing what they see, what they think, and what they intend to do. With Intent-Based Leadership,the culture of the organization shifts from one of permission and waiting, to intent and action. Not only does effectivity increase, people also feel motivated and are happier at work.

As work becomes more cognitive and less physical, Intent-Based Leadership offers a how-to for organizations to redefine what leadership means in a way that creates a workplace where the passion, motivation, engagement, creativity and intellect of each member is maximized.

Are you as a manager, or head of an agile org. tired of having to always have all the answers? Check out our one-day training course Essential Intent-Based Leadership March 2020 in Vienna.

How/When/Who developed the concept / methodology of Intent Based Leadership?

The concept of Intent-Based Leadership is the direct result of how David Marquet, former U.S. Naval submarine captain turned his ship the USS Santa Fe from worst to first in the U.S. Navy. David wrote an amazing book on how it all came to be: Turn the Ship Around!. It’s a great story, even if you skip the leadership tips! When David took over command of the USS Santa Fe, it was at the last minute. He only had three weeks to learn everything about the ship – an impossible task. When he took command, he quickly found out that if he followed the old ways of working with him giving commands in an environment where he didn’t know everything there was to know about the ship, and people following those commands blindly, people might get killed. This was when he decided to keep quiet and asked others to come to him with what they intended to do.

People implementing Intent-Based Leadership don’t have to have all the answers. When we stop “getting people to do things” and instead give control while increasing competence and clarity, we gain more engaged people who have the competency to make decisions, feel ownership and take responsibility.

How is Intent Based Leadership related to Agile: Is the methodology based on Agile, can it be applied only in an agile organization?

When I first read Turn the Ship Around! in 2012 after the book was published, my partner and I (in goAgile) thought “This is it! This is a way of leading that supports Agile ways of working.” Because so much of Agile is about team members taking responsibility, about being self-organizing, about being self-directed and having clarity about where we’re headed and why, in order to make better decisions at every level in the organization. David actually did not know about the Agile community when we first contacted him. Since then, things have, obviously, taken off for David and for Intent-Based Leadership. We’re not the only ones who can see the advantages IBL brings around how to give control, and increase organizational clarity and technical competencies. In our experience, organizations that combine Agile transformation with Intent-Based Leadership reach their goals faster. It’s because IBL offers real tools to nudge people into new behaviors, and that is the key to lasting change.

Attend our one-day training course and learn how to move in an Agile way to a culture where people take initiative and ownership. March 2020 in Vienna.

Can you give an example of how language increases the feeling of empowerment?

There is a lot of talk in organizations about how to empower people. What we know from neuroscience research, is that the only thing we can do is create an environment where people feel empowered. Empowering others is a contradictory statement. It says that I have the power to empower others. That is NOT what we are going for. We want people to have influence and control. And this happens when leaders create an environment where people feel empowered.

Now, with that said… “I intend to” are the three most amazing, empowering words we can use to increase the feeling of empowerment. Rather than asking permission, just saying “I intend to…” works on both sides. For the person saying it, it is simply informing others about what the person will do. For others, it provides information ahead of time. So there is an opportunity to give more information before the action occurs. Of course, there are lots of other examples of language increasing empowerment, “I intend to” is my favorite.

What is an example of a leadership tool that can be used to create an environment to adopt Intent-Based Leadership?

So one of the great tools from Intent-Based Leadership is called the Ladder of Leadership. It provides some simple questions leaders can ask based on how their people talk with them. For example, if someone says “Please just tell me what to do.” That person is at the lowest level on the Ladder. The leader wants to move them up the Ladder so that they will be more comfortable taking control. The question the leader asks is: “What do you see?” This is the next step on the Ladder. This allows the person to answer in a psychologically safe environment. The leader is asking for observations. Rather than jumping to “What do you intend to do?”, the leader needs to help people up the Ladder gradually. In that way, people become safe with taking more control, and over what is usually a very short time, you can move people up to the level where they come to you with what they intend to do.

Reading tips: If I think about attending the training, what should I read or watch, to be prepared best? (blog posts, YT videos etc.)

Of course, reading David’s book, Turn the Ship Around! is a great idea.

Here are a couple of other links to watch and read:

Interested to take a deep-dive on Intent Based Leadership?