For many agile teams, the key progress measurement is velocity with story points, but that just shows that people are busy delivering, not that they delivered anything valuable. Story points show that the product is moving around, not that it is moving ahead. This workshop helps product managers and teams get a good idea where they want to go, how to get there, and how to measure achievements instead of just velocity.

Everyone aims to deliver value, but lofty goals are difficult to use short term to understand if we’re going in the right direction, and high-level business objectives rarely result from simple stories. With techniques such as impact mapping and user story mapping, teams can get a great structure in place to engage stakeholders and ensure great outcomes, not just more outputs.

Watch Gojko talking about the workshop

On the 2nd of March we had another meetup in our Vienna office.

The .NET Community Austria met to hear a talk from Raoul Holzer and me about “Serverless with Azure Functions”. 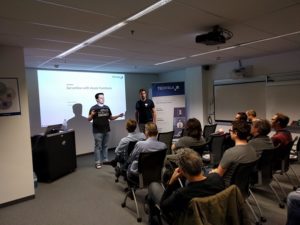 We gave a short introduction about the idea behind a serverless architecture and then how to implement it with Azure Functions.

See our TechTalk-story for a report of the meetup:

The slides for this event can be found here.

In 2016 TechTalk hosted the Global Day of Coderetreat in Vienna.

What it is about:

A Coderetreat is a day-long, intensive practice event, focusing on the fundamentals of software development and design. By providing developers the opportunity to take part in focused practice away from the pressures of ‘getting things done’, the coderetreat format has proven itself to be a highly effective means of skill improvement.

Remark: TechTalk will be hosting the Global Day of Coderetreat 2017 as well. For further information please refer to our training site.

We can only confirm these trends. Last year we decided to host a serverless code camp together with Gojko Adzic, and the feedback was overwhelmingly positive.


Given these market signals, we have scheduled a 3-day training session with Gojko for developers and system architects involved in cloud-based solutions who want to apply the principles of serverless to their projects.

Watch Gojko introduce the serverless workshop and briefly talk about the advantages of AWS Lambda and API Gateway in his TechTalk Stories Video.

The 3-day workshop is scheduled to start with the basics of AWS Lambda on Wednesday 22 March 2017 and ends on Friday 24 March with the creation of an application that is scalable, high performance, and above all serverless.

We will also be sponsoring the next serverless meetup on 15 Feburary at the TechTalk offices, and are proud to announce that Gojko will be a speaker there as well.